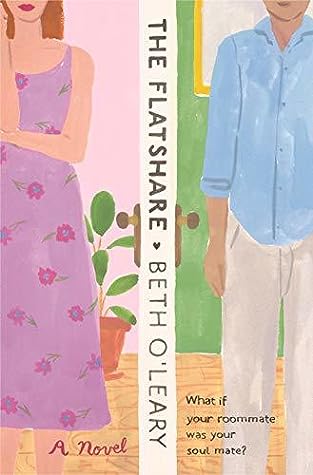 So after reading Alias Grace, this book was the perfect amount of light and fun to relieve my leftover raging feminist tension. And I just so happened to have discovered a new…

The Flatshare is the story of Tiffy Moore and Leon Twomey: two people with quite opposing problems. Leon is trying to find a way to make some extra money to pay his brother’s lawyer to fight his brother’s unfair imprisonment case and he’s decided to rent out his flat during the night time hours, specifically from 6pm – 8am. Leon is a palliative care nurse who works the night shift, so he’s literally never home at night. Tiffy needs to find a decent place to live and quickly. She’s trying to move out of her ex-boyfriend’s house after she pitched a fit about him moving on from their relationship – in front of his new girlfriend. She has a 9am – 5pm job, so Leon’s flat, while not exactly what she’s looking for, it’s certainly the only decent choice she can find that fits her budget. And so begins their story.

Leon’s girlfriend, while unhappy with Leon’s idea of raising money, takes on the task of meeting with Tiffy and showing her the Flat and heading all communications with Tiffy while she’s living there. Understandable, considering this woman will be sleeping in her boyfriend’s bed. Tiffy and Leon don’t actually meet until about halfway through the book. So how do they communicate? Post-its. All over the flat. It starts out with little notes welcoming the other person to some baked goods or leftover dinners and it just kind of evolves from there. I don’t want to delve too much more in to the plot because it’s definitely worth reading for yourself so I’ll just move on to telling you what I loved about this book.

My absolute favorite thing was how Leon went out and bought name brand boxers to replace his cartoon boxers once he realized they’d be hanging all over the flat on laundry day. Something about this was both hilarious and heartwarming at the same time.

I also really loved the difference between Leon’s chapters and Tiffy’s chapters. Leon’s were short, gruff and to-the-point. There weren’t even quotes around dialogue in his chapters (which usually drives me 🦇💩🤪). Tiffy’s were so eloquent and filled with her actual thought processes and quotations around dialogue. While the difference may seem annoying to some (and while I totally get it because I’m usually one of them) it really helped to put me in Leon’s mindset.

There was also a lot of good therapy rep in this book. Something that’s been missing in almost all of the books that I’ve been reading lately. In fact, I can’t think of the last book that I read that included one of the characters actively seeking therapeutic help. But you saw it here. Tiffy’s ex really did a number on her, and after her friends pointed out some of his concerning behaviors over the years, Tiffy decided to seek out someone on her own. You don’t see that enough. I am a HUGE fan of therapy and I think a lot of people tend to avoid it because of the negative stigma that seems to follow it. And there are also a lot of people that think that maybe they don’t have a mental illness so how could therapy help someone like them who is just battling regular old life? But this book was a good example of how therapy can be helpful to those regular people and I am totally here for that.

Something else that I loved that I feel like I don’t see in a lot of contemporaries is the fact that there was a clear separation between Tiffy’s best friends that she’s known forever (Gerty and Mo), and Rachel her work friend. They actually had different personalities. Rachel and Gerty are almost polar opposites. Where Gerty tells Tiffy she needs to get over Justin (the horrible ex), Rachel tells her that she should keep sleeping with him and that they should get back together. This was such a good depiction of real life friendships. Aside from the few times Rachel and Tiffy get together outside of work, Rachel has no idea how much of a turd Justin was because she didn’t see Tiffy and Justin’s interactions the way that Mo and Gerty did. She only heard Tiffy talking about the good things, because that’s usually what you share with your coworkers. In most of the contemporaries I read, the work friends act just like the regular friends and everyone just supports whatever the protagonist wants. This was such a well-needed break from that.

♈And finally, I really enjoyed the fact that the romance wasn’t insta-love, as we’re so fond of calling it. Tiffy and Leon put in the work. The book didn’t start with them as friends already, and it bears repeating that they didn’t even actually meet in person until about half way through the book. They didn’t even really text. Their sole source of communication was the post-it notes. And they didn’t fall in love with each other the first time they laid eyes on each other. Leon didn’t go from being this gruff man who was suddenly in love with this woman he’d only seen once. It started out gradually. He notices how much Tiffy’s stuff brightens up his apartment. He appreciates how effervescent her personality is, even though it’s the polar opposite of his. He’s awed by the fact that she’s optimistic enough to believe his brother is innocent, just based off of the facts that he’s given her. Their love story was gradual, and perfectly imperfect.♈

Thank you Beth O’Leary – this book came at the perfect time for me.