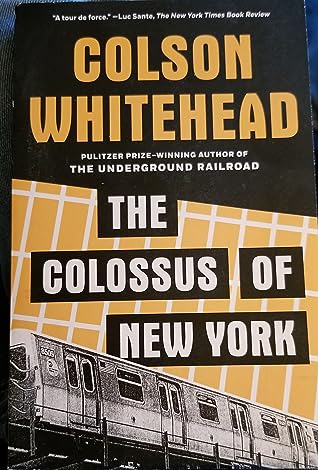 “Never listen to what people tell you about old New York, because if you didn’t witness it, it is not a part of your New York and might as well be Jersey.”

Colson Whitehead has been on my radar for quite a bit now, but thus far I’ve been unable to get to him. Enter my new book exchange book club, and I finally get the opportunity and I will say I was not disappointed.

I absolutely loved his writing style. He has such a talent for making the mundane sound poetic. As someone who has never had a desire to visit New York (I don’t like crowds and feeling rushed, two things I associate with New York), Whitehead helped me see what the appeal is for others. Whitehead’s New York sounds beautiful. Magical, even.

There were a few instances where we could glimpse some sarcasm. I loved those little snippets because Whitehead’s brand of sarcasm matches mine exactly. I found myself being carried away in his fluid writing only to be brought up short by a dry joke inserted here and there. I loved it!

“Live every minute as if you are late for the last train.”

I did notice that there seemed to be a shift in the way Whitehead’s New York felt in the beginning of the book to the end. In the beginning, New York is this mythical place where dreams come true. A place where people who are down on their luck can make something of themselves. There is a sweet kind of optimism in those on the Greyhound bus and those exploring neighborhoods that are new to them. And then towards the end of the book you kind of get the sense that everyone is a fraud. Everyone is pretending to be something that they’re not, just to keep up an image. And as surprising as that was to me, the two perspectives didn’t really clash. They’re both true, in some respects. Everyone has a little bit of a fraud in them.

“This city is reward for all it will enable you to achieve and punishment for all the crimes it will force you to commit.”

Whitehead, to steal his own words, “inflate[s] experiences to a metaphorical dimension.” He made the everyday commuter journey seem meaningful. I found the attempt that everybody makes to find their personal version of New York, quite beautiful. Poetic even.

“What was true for citizens a hundred years ago remains so.”

I will say that before I started reading this book, the New York that I pictured in my mind definitely vibed with the feelings I got from the second half of this book, but after I finished, I found myself vibing more with the first half. This book made me view New York through a previously unexplored lens and I really liked every minute of it.

“Maybe we become New Yorkers the day we realize that New York will go on without us.”

Have you ever read a book that just completely changed your perspective on something? Was it for better or worse? Does it happen often or is it kind of rare?