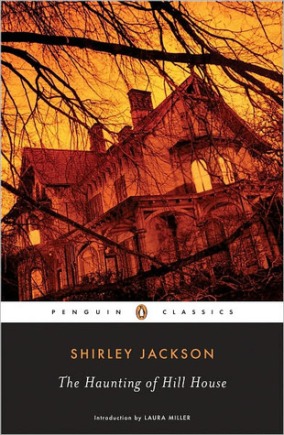 I’m definitely not a scary books or movies kind of person. A lot of my reading is more lighthearted and serves as an escape from the harsh realities of day to day life. I don’t know what kind of magic is associated with Halloween, but it’s strong enough to make even me want to watch scary stuff and read scary books. The hubs went on a fishing trip this year around Halloween and I was surfing for something festive to watch and I stumbled across the Netflix show The Haunting of Hill House. I’m not gonna lie, I spent most of my time with my hand over my eyes with only enough space to read the closed captioning. Even with all my extra-ness, it was still a fantastic show. Highly recommend. Only later did I find out out it was a re-imagining of this book.

Of course, because it was around Halloween there was a massive hold line for the library book, but I joined the queue anyway because I just loved the show so much. I ended up getting this book the second week of December. Way to get in to the holiday spirit, amiright? A little surprise for me though, was that this was actually a pretty quick read despite the fact that I was reading it out of season.

I’ve seen quite a few people mention that the reason Shirley Jackson rose to fame with this book was because the fear in this story didn’t necessarily come from scary things that happened to the characters (though there is plenty of that in there also), but it stems from the questionable sanity of the main character whose perspective we follow throughout the book.

“‘Fear,’ the doctor said, ‘is the relinquishment of logic, the willing relinquishing of reasonable patterns. We yield to it or we fight it, but we cannot meet it halfway.'”

I will say that by the time I finished the book, I had no real idea if the paranormal events that Eleanor described actually happened or if they just took place in her mind so, Shirley Jackson for the win folks. This iteration of the story is about Dr. Montague, a paranormal investigator, who rents out Hill House for three months in the summer. He invites people who have experienced something paranormal at some point in their life to stay with him in the hopes that they would serve as a conduit for paranormal activity that he would then be able to record and publish in the academic community. His main goal is to acquire actual evidence that can be documented to prove the existence of ghosts/spirits/paranormal-freaky-stuff. The owner of Hill House insists that Dr. Montague include Luke Sanderson (the eventual heir to Hill House) since she’s a little uneasy with just having strangers in the house considering her past experiences. Eleanor Vance and Theodora (no last name) are the only two who follow through with Dr. Montague’s request and show up on the appointed date at the allotted time. The first couple of days that they spend in the House are fairly innocuous, but Hill House was just trying to lure them in with a false sense of security.

The character of Eleanor is written in such a way that the reader really isn’t sure whether or not she’s crazy, though with the climax of the novel, I guess we kind of learn that she is…?

At the end of the book she just runs her car in to a tree. It just seemed kind of out of character for her, though I guess if I were slowly devolving in to insanity crashing in to a tree might sneak up on me too… She spent the majority of her adult life catering to her tyrant of a mother and then once her mother dies, she still has to answer to her sister. I feel like most people who would live through that and then Hill House would end up killing everyone in Hill House, not themselves. It just didn’t jive with me.

The story itself also didn’t feel very suspenseful. I didn’t get scared reading this (like I totally did watching the show) and I was able to read it at night. The suspense, at least I think, can be found more in what the characters are hiding, or what the author doesn’t reveal about the characters, than it can in the events that take place in Hill House. It just seemed like a regular haunted house to me, which I’m actually kind of in to those. I would definitely classify this as more of a classic than I would horror. Now the show scared the living daylights out of me. I was a total wimp when I watched it. This is a weird case of the show/movie being better than the book, but again, the show was a re-imagining. That might be why I feel let down after reading the book, but either way:

Take my rating with a grain of salt though guys because horror and scary stuff is totally not my jam.

Have you guys seen the show? How do you think the book and show compare? For those of you who like scary stuff….why? Why do you like to be scared?