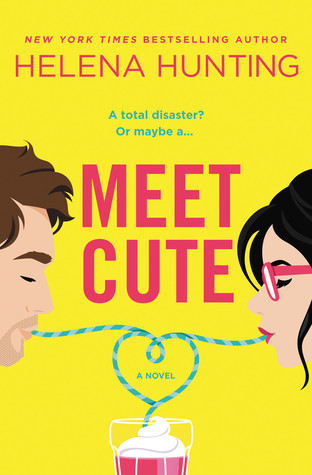 So the synopsis of this book led me to believe that this would be a romance where the “meet-cute” of the the love interests played a big role either in them getting together the first time, or back together the second time (gee, I wonder why 🤔). I was surprised (but not upset) to learn that it actually factors very little in to the story, and really only in the beginning, when the characters meet back up as adults. You know me and my obsession with titles and how they relate to the book as a whole.

This book has so much more depth than just Kailyn falling for former teen heartthrob Dax. We have Kailyn the lawyer who spends as much of her free time taking on pro bono cases to help out families in need. We have Dax the heartthrob who actually didn’t let fame get to his head and studied and ended up becoming a lawyer too. Kailyn’s obsession with Dax’s TV character really ends up taking a seat to the actual backbone of this story, which I LOVED because celebrity meet-cute romances are a tired trope these days.

I really liked the direction that this story ended up going in. But, as someone who works in the legal field, I had a real problem with some of the facts and to get in to those nitty-gritty facts, we’re going to have to talk spoilers…

No worries – it’s no where near as dramatic as the GIF indicates.

♈ My first issue with this book was that Kailyn and Dax meet again because Dax’s parents die suddenly and rather tragically and he becomes the guardian of his teenage sister. His aunt however, soon files a petition to try to gain custody of his sister, thereby necessitating a neutral third party to become, what we here in Maryland call, a guardian ad litem, but what the book refers to as a conservatorship. The point of this conservatorship is that this neutral third party is supposed to essentially protect the financial interests of Dax’s sister while Dax and his aunt battle it out in court. Well, as you might have guessed, here comes Kailyn to fill this role. The second that I saw that this is where this book was going, I just cringed and I don’t think I uncringed from it until it was over. I get that the setting of this book isn’t in Maryland, but the concept is the same. There is NO WAY the two of them should have even entertained a relationship until Kailyn’s conservatorship was over. And they were both lawyers! So they absolutely should have known this.

My second issue was mildly resolved within the book itself, but it still kind of got to me. In an effort to prove that Dax’s aunt is trying to compromise his sister’s finances, Kailyn ends up recording a conversation that his aunt has with her friend, on her phone, without Dax’s aunt being any the wiser. In this case, FEDERAL, meaning it is uniform across all 50 of our United States, law says that you cannot record someone without their consent or a court order. So even with this recording, Kailyn – in theory – wouldn’t have been able to use it. Now Hunting kind of takes care of this issue for me because they don’t actually attempt to use the conversation in court, they just make Dax’s aunt aware that they have the recording and then she drops the petition, but even with that resolution, Dax and Kailyn are taking advantage of someone’s poor knowledge of the law to their own benefit. It just kind of rubbed me the wrong way. ♈

So I think this one was just a simple case of me not being able to separate my work-self from my leisure-reading-self. The chemistry between the two of them was great, I loved how this story gave me so much more than what I expected from the cover, but I couldn’t really get my head around those two issues.

Also, while before I kind of shied away from reviewing romance novels on my blog (because I read so many of them that I would just have so many books to review), I decided that if there are some that I really want to talk about, why the heck not? I mean, that is why I started this blog in the first place. So what I did because I know there are generally two types of romance readers (Camp 1: “Hell yeah, give us all the dirty scenes!” and Camp 2: “I don’t need explicit scenes to enjoy a romance.”) I’m going to tag the romance books that I review with either an “Explicit Romance” tag or “Implicit Romance” tag, so make sure you peep the tags if you want to read any of the ones I talk about. I don’t want people to not enjoy the book for that reason.

Have you ever read a fictional telling of something that you are extremely familiar with? Was it hard to separate your knowledge from the author’s story? How do you end up meeting your spouse/partner/significant other/dementor? Any meet-cutes out there?