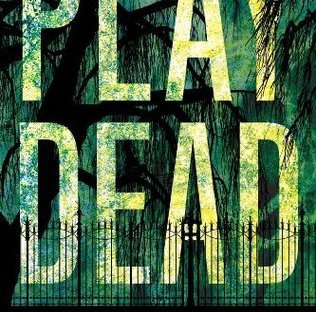 I know you guys are probably pretty tired of hearing me sing the praises of Goodreads Deals, or just mentioning them in every. single. post. But some of us are on a budget, so I appreciate the fact that Goodreads is appealing to my thriftiness. Anyway, this book came up in an e-mail from Goodreads because it was on sale and I immediately latched on to it because I remembered how much I loved The Body Reader by Anne Frasier, and I wanted to see if maybe it was just Anne Frasier’s writing that I loved, or if it was the plot of The Body Reader that really drew me in. I discovered that it was in fact, the plot…

And so, I gave this one only….

My main take away from this book was just that there was a whole lot going on. Elise is a detective with the Savannah police department. She also has a teenaged daughter named Audrey who kind of hates her and lives with her father and his new wife. Elise has also wrestled with the concept that she is the daughter of Jackson Sweet, a famous voodoo guy who died a while ago in the Savannah area. Her partner is David Gould who is chocked full of his own issues ♈ like the fact that his wife murdered their son because her side piece told her he didn’t like kids and they could only be together if she got rid of hers and then the FBI office that he worked for told him it was probably best if he went and worked somewhere else so that negative attention wouldn’t be drawn to the Bureau  and he has since been addicted to depression pills that often leave him more vacant than present and he has just moved to Georgia on top of all of that♈. Elise and David are relatively new to their partnership and David gets made fun of by the Department because he’s a “yankee.” There is also the city’s resident voodoo priestess Strata Luna who has a tone of rumors around her. Many think she killed her own daughters and she’s running a prostitution ring. And then there’s the crazy doctor who takes tetrodotoxin (TTD) just to get a wicked high. TTD is the poison in puffer fish that is highly dangerous and someone in the community is using it to “bring people back to life.”

While I get that mysteries and thrillers tend to do a lot of information dumping to try to keep you guessing as to ‘whodunit,’ this story just felt like there were too many cross-stories and events happening. But not much of it was centered on the main mystery. The book never really got there.

And so while I am totally in to the whole voodoo thing and local legends thing and you know, dead bodies that aren’t really dead….but are they…? thing, there was too much going on in this book for it to really capture my attention. I found myself struggling to remember all of the details about all of the side characters, with none of it meshing into a cohesive story.

So of course I was like, how could this be when I loved The Body Reader so much? Turns out this was Frasier’s third book published and it was published over 13 years ago. The Body Reader was way more recent with a publication year of 2016. So maybe it’s a case of me just not enjoying the early works of an author? Or maybe Frasier has gotten better over time? Apparently this is the first book of a series and she just released the 4th book in this series, this year. But while I didn’t like this one all that much, I don’t think I’m ready to just leave Frasier in the lurch. I’ll definitely keep my eye out for her name in the Goodreads Deals e-mails, and maybe I’ll have better luck with the next one?

P.S. If you want to read the spoiler, highlight between the two ♈ symbols.

One thought on “Play Dead by Anne Frasier”