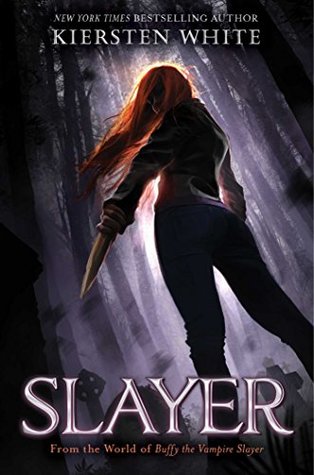 Alright, so I’ll preface this review by saying that I’ve never watched a single episode of Buffy the Vampire Slayer. I have, interestingly enough, seen a few episodes of Angel (a spin-off) here and there and am, or I thought I was, decently familiar with the universe. For those of you like me, who haven’t watched the show but want to read this book – you can! There are definitely quite a few references to things that happened on the show, but Kiersten White does a good job of explaining the background of the things you need to know to get you through the story.

With that being said, it still felt like I was reading the third book in a series without having read the first two. Buffy is mentioned on practically every other page. If I had to guess at the timeframe, I would say that this book takes places maybe just a couple of months after the show ended. Like, less than 6.

The story line was decently paced, the characters were fun, and the relationships were cute and overall there was definitely a lot going on in the book. It felt to me that there was just a little too much going on to keep everything straight, but again, that could be due to my unfamiliarity with the Buffy world. I will say that on Goodreads, the reviews seem to be pretty split, with people who were fans of the show loving it, and those of who haven’t watched it, tolerating it.

My biggest issue with the book was how childish Nina, our main character, was. Nina, also known as Athena, and her sister Artemis have a weird relationship where Artemis is the strong capable sister, and Nina is the week sister, not expected to amount to anything other than a healer. There are a lot of issues between the two of them that I’m not going to go in to because I’m trying to do a “spoiler free” review here and there if I can, but the main takeaway is that they’re twins and that they’ve always been close. But a recent event causes them to sort of drift apart. And when I say recent, I mean something that we learn about in the very beginning of the book. And about 67% of the way through the book, the two of them still haven’t “talked” and figured out what’s going on. So it really felt like the drama was being used as a plot device, rather than happening organically, if that makes any sense. And overall, there was little to no character growth for Nina. Almost the entire book she complains about the fact that she’s a Slayer and not a Watcher, until almost the end where she decides to figure how to live with her lot in life. Nina came across as whiny. And I tried, really tried, to remind myself that this was geared towards Young Adults, because I recognize that I no longer fall under that categorization, but it was still hard to get through. There was still a lot left for me to like; the concept, the quirky humor, the friendships, the continuation of a tv series, etc. But Nina really hampered my enjoyment of the novel.

“Being chosen is easy. Making choices will break your heart.”