Wow, I really enjoyed this little adventure in both time and space. Aurora Rising takes place in the year 2380 and follows a band of graduating cadets of the Aurora Academy, headed by squad leader Tyler Jones. Tyler, the rising star of Aurora Academy, botches his chance of having a stellar squad when he goes out on an unsanctioned rescue mission the night before the big draft. His rescue mission is successful and his stellar squad goals crashed. He’s left with the rejects, with the exception of his sister (the Face) and his friend Cat (the Ace). But bigger than all that is the subject of his rescue mission: Aurora Jie-Lin O’Malley, or Auri, as she prefers. She’s about to throw a wrench in everything.

I have never blown through 473 pages faster than I did with this book. 2 days. That’s all it took. Normally books this big take me a week or two. But almost immediately I was hooked. The first thing that really grabbed my attention was the fact that Auri has visions. Auri has been in a cryo-induced sleep for about 200 years floating in deep space. Nobody knows what effects this will have on her. In fact, everyone had long given her up for dead. But we learn not long after her rescue that a side-effect of her cryo-sleep is these visions – something she definitely didn’t have when she fell asleep 200 years ago. I don’t know what it is about pre-cognitive abilities that gets my motor running, but I really like it. Aside from that though, her whole situation is crazy to me. I can’t even imagine falling asleep on Earth and then waking up 200 years in the future in space with everyone I knew having died at least 100 years ago. I really felt for her. And at the same time, I was really impressed with how composed she was about the whole thing. Yeah she had her freak-outs, but those were well-earned – I’m talking about overall composure here. 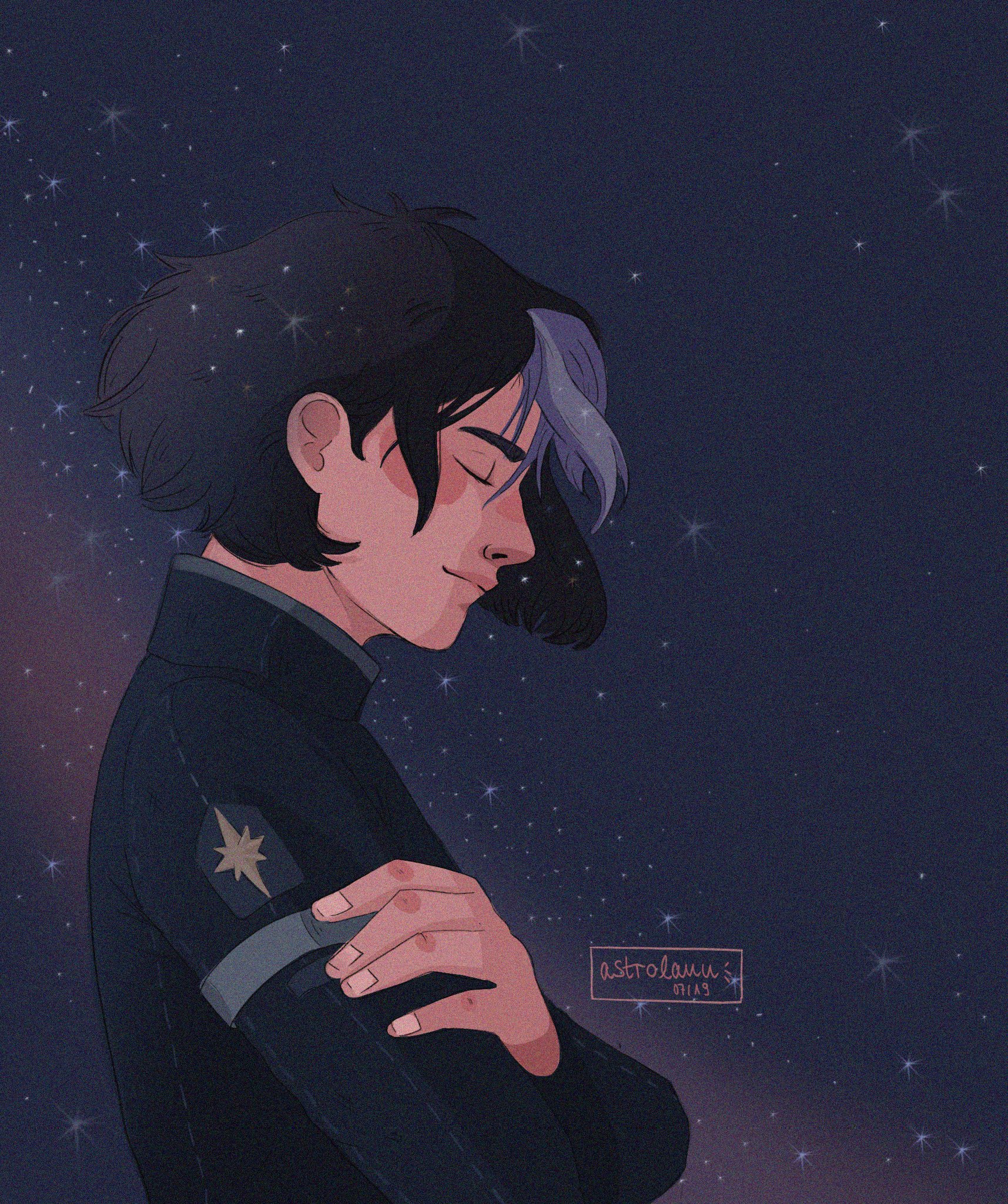 Check out this awesome #fanart by Laura who can be found at @astrolauu on both IG & Twitter. You should check some of her stuff out if you’ve got a moment.

So Auri’s visions really captured my attention, but you know what kept it? The rest of the characters. I mean, yeah the plot was pretty interesting and engaging and I was excited to see what happened next and all, but I was invested in each of the characters. Finian was my absolute fave. His sarcasm had me L.O.L.-ing quite a few times. He was exactly the comedic relief needed from the jam-packed story-line. I also really love when books make me laugh-out-loud. My husband gets super jealous about it because apparently as my husband he has the monopoly on making me laugh, but I love it. Kal was the second runner up for favorite character. First of all he has purple eyes and bleeds purple, and I’m over here super jelly about it. Not only did he have an interesting back story, but we also saw a lot of growth in Kal throughout the book. I was intrigued by the fact that he referred to his conscience as “the enemy within.” It was a little unclear to me whether or not these feelings were specific to Kal or whether or not it was a sentiment expressed by all of the Syldrathi, but I thought it interesting that a Warbreed Cabal would not trust his own inner thoughts or gut feelings. Most warriors credit their gut/conscience with their survival. I also could have totally been missing the mark on this. But Kal put in a lot of work to grow beyond the reputation that the other Warbreed Cabal’s made for him and I just want him to know – I see you boo and I’m here for it. 😉 Also, I really really liked his insults. “Stain on the underpants of the universe!” was by far the best thing I’ve ever heard.

And Cat. What is there to say about Cat? ♈ I’m not going to lie, I doubted her almost the entire book. I totally thought she betrayed both Tyler and the Squad and I was getting SO angry about it. And then the ending of the book came around and I just felt like an all around bag of trash 🚮 for doubting her in the slightest. Despite the fact that Cat and Tyler had a one night stand, Cat (and this book) somehow avoided the “we had a one night stand and one of us has deeper feelings than the other and my behavior shows it” trope. This was one of my most favorite things about this book. You see this so much in both YA and regular fiction (with a romantic subplot) or romance in general. Instead of backstabbing Cat and Tyler used honesty to make sure that they worked cohesively with the rest of their team and I was totally here for it. I love seeing people (both young adults and regular adults) solving problems like adults. Maybe because it happens so rarely? I mean, I get that it provides drama for the story if they don’t, but it’s actually harder to have honest conversations with someone than it is to lie to them. Anyway, I’ll hop off of that soapbox and just say that Cat absolutely got the ending she deserved. She was strong, she was self-sacrificing, and she went out like a gd hero.♈

Since we’re (kind of) on the subject of things this book did well, I’d like to add ♈ Auri’s reaction to Kal’s reveal of the Pull and what it means. I love, love, 1,000 times LOVE the fact that Auri didn’t respond to Kal’s statement with “insta-love.” This goes back to my statement about her being composed. She has such an adult response to the whole thing. I’m not going to lie, part of me was a little offended on his behalf when she didn’t respond in any way (I know – I’m a confusing ball of mush), but when she brought it up later, she just handled it so well, and in such a mature way. ♈ That makes two major tropes this book avoided and you can just color me impressed about it.

Since I rated this 4 Flames, my dislikes were way smaller than my likes. There were two things that, I wouldn’t say are “bad” but, I would say were a small hurdle to my enjoyment of the novel. 1) Six different perspectives was kind of a lot to follow throughout the whole story. In reality we really only get 5 because Zila’s chapters were so minimal, but I still had a few incidences of not remembering who was narrating and not being able to tell by the dialogue or writing and having to flip back to the beginning of the chapter and figure out whose mind I was in. And 2) the fact that this was a “janky” squad filled with rejects seemed to be a tad bit oversold throughout the book. I get why it’s important in the beginning, but it came up quite a few times towards the end too. After 200 pages it was kind of clear that these guys were a solid squad so it jarred my attention when it came up later in the book. In my mind, we were already past that aspect of the story.

Overall this book was a rip-roaring good time filled with the color purple 💜, lots of space and stars 🌌, young adults acting way more mature than some adults I know 👯, and characters that you just can’t let go of once the book is over 🤝. This was a damn good story you guys and I really liked it.

“Almost every particle in the universe was once part of a star. Every atom in your body. The metal in your chair, the oxygen in your lungs, the carbon in your bones. All those atoms were forged in a cosmic furnace over a million kilometers wide, billions of light-years from here. The confluence of events that led to this moment is so remote as to be almost impossible. Our very existence is a miracle.”