Well, I ended up taking an unplanned break from blogging for a bit. Like 5 months. Whoops. I was still reading and all that jazz, just not posting. But I’ve missed it, so I’ve decided to finally jump back in with one of my RBTW book club picks for the month of May. And wow, let me tell you, if you’re looking for a book to make you wonder “what if?” then look no further than The Husband’s Secret. 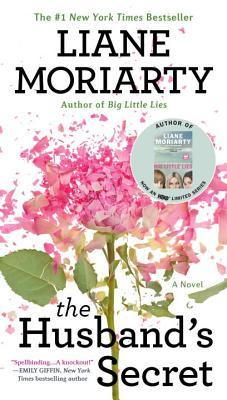 I’ve decided to do a discussion post for this one because I just have so. many. thoughts. So here’s your warning folks, there will be spoilers!

This was my first Liane Moriarty book and let me tell you, I was captivated. Not necessarily by the storytelling – I would classify Moriarty’s writing style as adequate/typical for this genre – but by how much this book made me think about what I would do if I was in the various positions the characters found themselves in. This book is told from three alternating perspectives: Cecilia Fitzpatrick (super mom), Tess (regular mom) and Rachel (elderly mother of a deceased child), with a few flashbacks thrown in there for good measure. There was a whole lot of mom-ing going on in this book. And wife-ing. Yes I just made those in to verbs. As mentioned in the synopsis, Cecilia finds a letter addressed to her, written by her husband, to be opened by her upon his death. Though Cecilia finds the letter in Chapter 1, she doesn’t end up opening it until about a quarter of the way through the book so if you just want to find out what the letter says, you’ll have to read a little bit further than you might have anticipated. There are 3, almost 4 perspectives sprinkled throughout the book and it’s kind of hard to breakdown all of the nuances in each of the perspectives’ back story in addition to current events.

Before I get started on my dislikes, I’d like to leave you with a little pro-tip right quick: For those of us in America reading this book, it may be important to note that this book takes place in Australia. As such, the seasons are flipped. Where we experience spring during Easter, Australians are living through fall. I would like to think that most of my fellow countrywomen (and men) know this but a lot of people on GR seemed to be confused about the whole season thing so I thought I would just add a little note.

TESS. Is she a sociopath? Like I sensed no real emotional attachments to anyone that she talked about. Not even her son! She was very self-involved and this is the only perspective that I’m not sure really adds anything to the story. The synopsis tells you that the “secret” effects the lives of three women, which I took to mean the three perspectives, but maybe meant the victim and then Cecilia and Rachel???? Because I really don’t know how Tess fit in to all of that. I see no way that she was affected by Janie’s death in the present other than the fact that Connor Whitby remained single thereby allowing her to sleep with him to get back at her husband…?

I totally get why the Berlin Wall was brought in to the book (walls separating people from each other be they emotional or physical barriers), but the italicized flashbacks did not make much sense to me. They’re almost like news articles but a couple of them actually add a different perspective (i.e. that of Tess’ mother Lucy) to the story and since we already have three, I’m just not totally sure they were necessary.

Especially considering the fact that the little tidbits of information that are revealed in the flashbacks aren’t explored in the rest of the story and don’t really seem to come in to play.

ALL OF THE QUESTIONS THAT IT LEFT ME WITH!

Alright, so for all of my burning “what ifs” I decided to post a list of my questions. Oh, did you not come prepared to take a test? That’s your mistake. Just for shits and giggles I decided to add my own answers in purple:

So many of these questions linger, at least for me, because I can’t answer them at the moment. I don’t have any children and I have no idea what it’s like to lose a child. I’m currently happily married (or so I believe – dun dun dunnn), without any questions related to fidelity or murder.

“You could try as hard as you could to imagine someone else’s tragedy – drowning in icy waters, living in a city split by a wall – but nothing truly hurts until it happens to you. “

Hypotheticals are always hard but I loved that this book forced me to live in them for a little bit. That doesn’t happen to me all that often any more.

With all of this being said, I would have to give this one…

Which on GR translates to, really liked it. Was the writing awesome and captivating? Probably not. In fact I would probably give this three stars if it wasn’t for the fact that it made me think so much. And ponder. And try to imagine myself living in the circumstances that these characters lived in and map out what my reactions would be. That is what really made me like this book.

2 thoughts on “The Husband’s Secret by Liane Moriarty (Spoilers)”